Dr Dave Daversa joined to work as a postdoc on Andy Fenton‘s NERC-funded project “Quantifying host species contributions to pathogen transmission in a multihost community: the case of chytrid fungus in amphibian communities”.

Andy Fenton  published a blog post for Journal Animal Ecology on the role of ecology in managing vector-borne diseases, it can be found here.

An article on an epilepsy project involving Beth was recently published in Lancet Neurology. The project is striving to disentangle the potential  link between onchocerciasis and the prevalence of epilepsy in sub-Saharan Africa.

While at UoE/UoG  Shaun will be continuing his PhD work, and assisting in field work (which for a data scientist, he says, will be ‘an experience!’).

Georgia recently attended the 9th international Wolbachia conference in Australia, giving a talk on her work looking at a symbiont of honey bees. The biennial meeting focused on the reproductive parasite, Wolbachia, and other notable endosymbionts of arthropods and nematodes. Nestled in the sub-tropical Queensland rainforest, over 80 delegates from across the globe assembled to present work on the evolution, ecology, genomics and cell biology of symbioses.

A group of PhD students and post docs attended the Manchester Molecular and Genome Evolution symposium. The day saw Georgia give a 15 minute talk on her work , while Jack and Stefanos presented posters at this excellent one day conference.

The day saw an early start for Michael, Stefanos, Jack and me as we caught the 06:05 train from Liverpool Lime St. It was well worth the early start as there were some fantastic talks from endosymbiont researchers from around the UK and overseas, including Christoph Vorburger from EAWAG Zurich, Melanie Smee from York and Julien Marinez from Cambridge. There were also talks from some of Liverpool IIB’s post-docs and PhD students including Dave Starn, Frances Blow and Michael Gerth. Highlights from the day included Vorburger’s talk on the role of endosymbionts in aphid-parasitoid coevolution, namely the role of Hamiltonella defensa and it’s bacteriophage in protecting their black bean aphid host from parasitic wasp larvae. The parasitoid on the other hand can counter-adapt to the symbiont’s protection by laying eggs in increased quantity or in younger hosts. This complex three-way interaction leads to some interesting coevolutionary dynamics. All in all, it was a very informative and friendly meeting and a huge amount of credit goes to Ailsa McLean from Oxford for organising the day.

As microbial ecologists Georgia, Chris, Michael, Jack, Stefanos, Greg and I attended the session ‘Insights from within: current advances in understanding microbial interactions with insects’ on the Wednesday and Thursday of the Conference. These two days were packed full of interesting material. Highlights of Wednesday included talks by Nancy Moran on the gut communities of Honey Bees, Bruno Lemaitre on Drosophila-Spiroplasma interactions, as well as some interesting talks from the Brockhurst lab in York on plasmid mediated gene flux in bacterial communities. Highlights from the Thursday included talks by Scott O’Neil on the use of Wolbachia to prevent dengue and zika virus transmission in mosquitoes, Angela Douglas on Drosophila gut microbiota and last but definitely the most interesting…a talk from our very own Greg Hurst on the evolutionary ecology of host shifts. This showcased some of my own and Michael’s work. Altogether, it was a highly enjoyable two days and luckily we didn’t have far to travel. 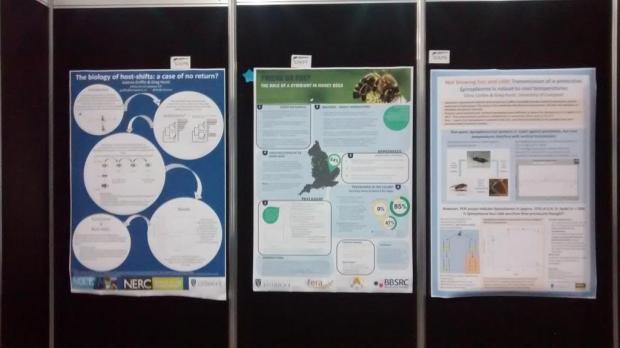 On the 8th March Andy Fenton will be talking at the Leibnitz Institute for Zoo and Wildlife Research, in Berlin. This is part of the Berlin Parasitology Seminar Series and will see Andy give a seminar focusing on parasite-host interactions and population dynamics.

NERC grant awarded to Greg Hurst: ‘How do sex ratio distorting symbionts affect the evolution of their host?’

Greg Hurst as PI, with Ilik Saccheri as CI, and CI Prof. Nina Wedell from Exeter. £522,602 to support a postdoc and technician to work on Wolbachia-Hypolminas interaction, and how suppression of male-killing evolved.

Crystal Frost to work with the USDA and Liverpool on bee symbionts in health and disease.

Eminent science writer Ed Yong picks up EEGID’s Rebecca Jones recent paper on aposematism, covering it in an article at National Geographic, check it out here

Klara Wanelik has joined Steve Paterson’s group as a post-doc from the University of Oxford.

Michael Gerth has joined Greg Hurst’s group as a post-doc.

Chris Corbin presented at at EMPSEB21 in Edinburgh, ‘Transmission of a protective mutualist, hy1 Spiroplasma, is robust to cool temperatures’.

Congratulations to Daria Pastok who successfully defended her thesis ‘Causes of spatial variation in parasite and pathogen pressure in insects’.